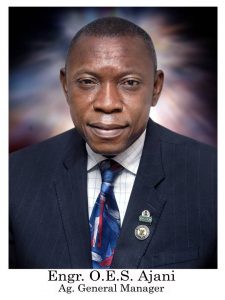 Engr. Olalekan Emeka Sulaiman Ajani was born to the families of Ajani-Bello and Oyelakin-Salawu of Popoyemoja and Foko Areas respectively in Ibadan on 1st of January, 1964.

O.E.S. Ajani as fondly called, attended St. James’ Primary School, Odokorodo, in Oluyole Local Government Area, Oyo State, between 1970 and 1975. He moved to Lagos in 1976 and had his secondary School Education from The Apostolic Church Grammar School, Orishigun, Ketu, in Kosofe Local Government Area, Lagos, between 1977and1982. He gained admission to University of Lagos in 1983 where he bagged B.Sc. in Civil Engineering in 1988. Engr. O.E.S. Ajani has M.Sc. in Civil and Environmental Engineering from the same unilag and MBA from Obafemi Awolowo University.

He joined the employment of LAGOS STATE GOVERNMENT in 2009, a first-time Civil Servant, as Assistant Chief Engineer and was posted to the Ministry of The Environment, Office of Drainage Services (ODS) as Water/Hydraulic/ Drainage Engineer. He remains in this Ministry where He had demonstrated high skill of projects management, dispute resolution and team co-ordination before being redeployed to Ministry of Physical Planning and Urban Development as the Head of Lagos State Material Testing Laboratory(LSMTL) on 7/06/2017.

Engr. O.E.S. Ajani is married to Mariam Omotola of royal Olofin family from Epe in Lagos State and they are blessed with Children.